“Philly Special”.  By now, everyone knows Dougie P’s code for the gutsiest play call in Super Bowl history.  The direct snap, reverse, throw back to our QB for a touchdown that will be remembered forever in the annals of Philadelphia Eagle lore and Super Bowl greatest moments history.  Consider the sequence:  A direct snap to an undrafted back-up running back, who then pitches to an undrafted back-up tight end, who then throws the ball to a back-up QB who two years ago pondered retirement to pursue a career as a pastor.  Touchdown!  A play that the QB called himself and agreed by (and created by) a coach who was running a high school team just 10 year ago.  This stuff can’t be made up!

Your Philadelphia Eagles are Super Bowl Champions!  Let that sink in for a minute.  Honestly, it hasn’t sunk in yet in the primatomma offices.  Closure is needed … perhaps celebrating with 3 million of our best friends tomorrow on Broad St. will do the trick. 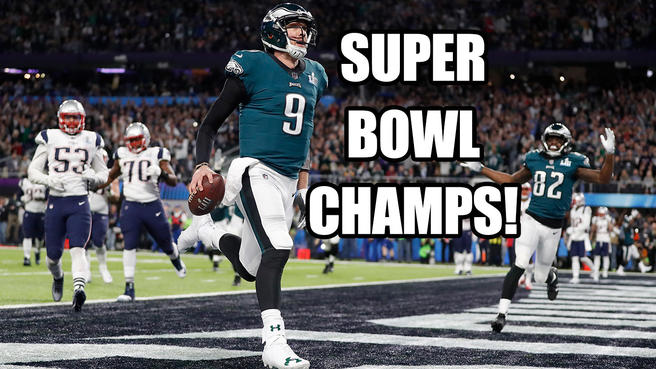 Nick Foles/Doug Pederson, they’re getting most of the ink and rightfully so.  I mean how could they not???  Foles arguably out-dueled the greatest QB of our time – possibly ever – if you take away the interception when Alshon Jeffrey almost made a miraculous catch.  And Pederson?  This dude will forever walk with the Philly coaching legends … Fred Shero, Billy Cunningham, Dick Vermeil, Dallas Greene.  His handling of this team is nothing short of excellent.  Losing as many key players as he did and still winning the Super Bowl?  Incredible.

But we go next level here.  All the rags can state the obvious.  Not here.  Not now.  Here’s the keys to victory beyond the obvious.

Last but not least, the Fans:  All of you reading who identify as Eagles fans – both lifelong and even those who supported the ‘Birds for just Super Bowl Sunday due to your disdain for the rule-bending, always catching the breaks, referee blowing Patriots – you played a HUGE role.  Let’s start with our reporter at the game, primaMurbase.  He reported a Linc-esque home field advantage for the boys in green.  From the TV broadcast, the Eagle hometown feel was immediate when the Patriots took the field, boos serenading down from every corner of the stadium.  We outnumbered the Pats fans 4-1 by some reports and the noise sounded even louder.  Did it impact Mr. Gisele?  Hard to say as he moved like a hot knife through butter most of the game.  But the other 53, definitely!  Start with the long snapper who botched the Pats early FG snap leading to a miss, and then the missed XP.  Were the Pats forced to go silent count on the pivotal play when Graham got to Brady in the 4th, causing the fumble?  Possible, and that may have provided the slightest advantage for Graham to beat his man en route to Brady.

You Eagles fans have been waiting and waiting and waiting.  The prize has found it’s way to Broad and Pattison.  For the final time of this series, and in the immortal tone of Andy Reid, the time AND THE SUPER BOWL LOMBARDI TROPHY are now YOURS!!!