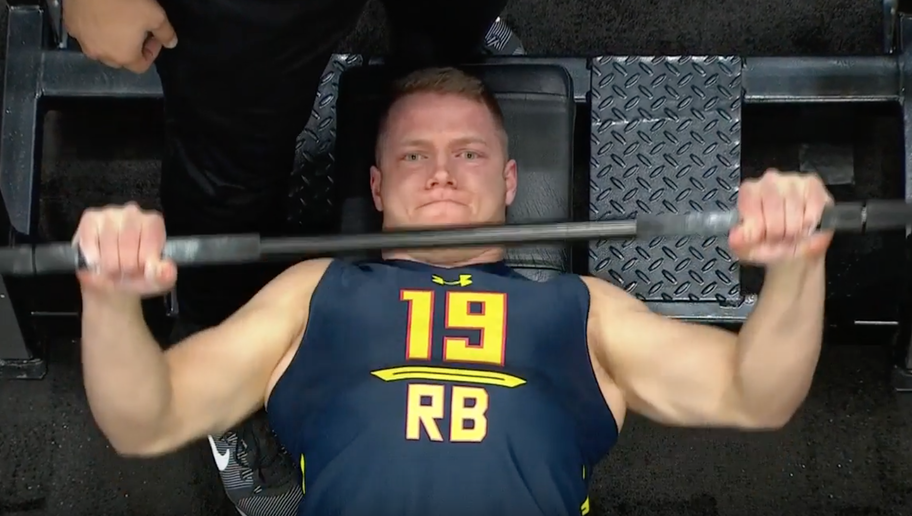 Unless you live under a rock, you know that the annual NFL bacchanal (otherwise known as the NFL Draft) has finally arrived.  And atop the Rocky steps in the City of Brotherly Love no less!  A sure first round pick is the RB/WR/KR extraordinaire from Stanford, Christian McCaffrey.  Now nothing is really a sure thing in the draft, as nice and shiny as the players look in the showroom, there’s always some warts; McCaffrey is no different.  See, prior to the draft, there’s an annual cattle call (i.e. “Combine”) where most of the prospective draftees are poked, prodded, questioned, and tested to supply additional data points beyond the hours of tape from their college careers.  Unfortunately for C-Mac (claiming primaCredit here … have yet to hear that nickname!), he flat out sucked on the bench press test.

Even though the dude is an athletic freak, laying flat on his back and pressing 225 lbs. as many times as he can is not one of his more accomplished feats.  He pressed that weight a paltry 10 times compared to others at his position who mostly reached the 18-30 rep mark.  (This morning, we put primatomma80 to the test.  After a 4 day golf bender, our man still repped out 13.5!  He’s too modest to admit so he recused himself from contributing to today’s missive).  Nobody’s suggesting that prima is now ranked higher than C-Mac on the NFL draft boards. Reams of other data predicting C-Mac’s NFL success is unfortunately light years ahead of our esteemed colleague.

NFL draft decision-makers will undoubtedly select C-Mac with the 8th pick tonight, currently held by the Carolina Panthers.  And the reason is COMPROMISE.  That’s right, they’re willing to compromise the lack of performance on the bench press in lieu of his accomplishments on the field, his intelligence, and all of the other physical measurables such as 40 time and vertical.

If only the nudnicks in Washington could understand the “C” word.  We are a country of amazing resources and extremely varied backgrounds.  We certainly could come up with workable solutions for our most vexing problems if only each side could push away from their entrenched, ideological positions of ALWAYS fully disagreeing with the other side.  So borrowing from the C-Mac example, here’s how we handle immigration reform.

Here’s the compromise that nearly satisfies all, not fully, but to a degree that all sides should be able to live with:

There you go, a nice C-Mac compromise that most assuredly will never happen.